Strengths and Weaknesses in Attracting Businesses to San Leandro

The San Leandro business community plays a critical role in continuing to move the local economy forward.  San Leandro's businesses are responsible for over 60% of the city’s total revenues. Economic development collaboration between city staff and the Chamber of Commerce, to support and uplift our local businesses and invite newcomers, is paramount.  For several years the Chamber of Commerce has entered into a Scope of Services agreement with the City of San Leandro.  Included in this year’s agreement was an initiative to identify strengths and weaknesses in attracting businesses to San Leandro through a series of roundtable discussions/interviews, and surveys.

Section I summarizes the roundtable discussions between SLCC CEO and business owners from July to August 2022. Section II summarizes the survey completed by SLCC Members.

Roundtable discussions were held with businesses located throughout San Leandro.  Mostly those who are members of the Chamber of Commerce and some non-members.  Multiple businesses participated in small, two and three persons, roundtable discussions.  They represented an array of industries and number of employees.  Types of businesses included were hospitality, retail, property management, business services, manufacturing, and construction.  The number of employees represented by the businesses ranged from five employees to several hundred employees.

To facilitate an open and frank dialogue, the meetings were purposely small with only two or three guests at once and no formal transcripts of the meetings were taken. SLCC CEO prepared general notes on the topics and concerns discussed (to craft the summary findings included in this document) and disclosed to attendees that comments would not be attributed specifically to any individual. In addition, the roundtables were closed to City of San Leandro staff and elected officials.   A list of questions was prepared and utilized to prompt the discussion and keep it moving forward.

The SLCC believes it is important to hear directly from business owners to ascertain information that is likely to affect attraction and retention of business and investment in San Leandro to further its branding and marketing efforts.  Although the SLCC interacts with the business community in many ways, the purpose of the roundtable discussions was to have direct and focused dialogue on the reasons why businesses choose San Leandro, their issues, concerns, and suggestions of improvements.  It was also intended to hear and respond to varying views on issues.  The insights provided from the roundtables will inform the SLCC organization and the City of San Leandro on components of what is working for business and what each organization needs to do more of or better on their behalf.

Findings from the Roundtable Discussions:

A list of questions was utilized to begin to the conversation and drive it forward.  Depending on the attendees, some topics were discussed more than others.  The following is not comprehensive to all the questions asked but rather a description of the most common issues, concerns, and comments.

To begin the conversation each attendee was asked what came to mind when they individually thought of San Leandro and how they might describe it.

Reasons to Have a Business in San Leandro: 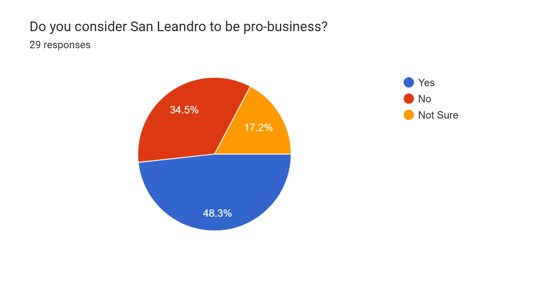 The survey was created by the Government Affairs Committee of the Chamber of Commerce.  Approximately 40 Chamber Members participated, representing an array of industries.  The number of employees represented by the businesses ranged from five employees to several hundred employees.  The length of time in business ranged from 5 years to over 25 years.

The SLCC believes it is important to gather data from the business community on their critical areas of concern of doing business in San Leandro and their level of satisfaction regarding San Leandro as business friendly.

The insights provided from the survey helped inform the SLPAC on components to inquire with candidates running for office and to inform the City of San Leandro on the business community’s experience of doing business in San Leandro.

Findings from the Survey:

A complete summary of the survey is included alongside this report.  The following is not comprehensive to all the questions and comments but rather a description of the top and common answers.

Top Three Critical Areas of Concerns:  Crime and safety, workforce, and permitting process. (Inflation was noted as extremely critical but viewed by the SLCC as a national concern.)

General Comments Regarding Critical Concerns:  The most common comments are crime has increased in San Leandro, permitting process is not prompt, reasonable nor cost effective and more housing is needed.

Satisfied with City Council’s Performance:  All topics on the survey resulted as not satisfied.  Reducing crime and reducing homeless had a much higher level of unsatisfaction.

Needs for Business Thrive:  Several comments were to address the crime in San Leandro, improve the building and permitting departments, and build more housing. 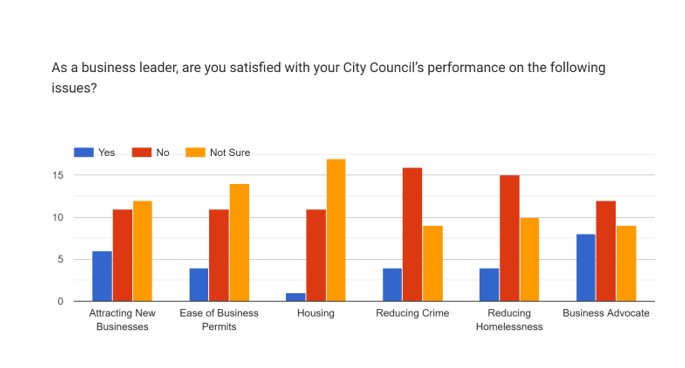